ILC, the International Linear Collider, is the next fundamental science project in high energy physics and the first ever true global basic science center.

What CERN did for the European HEP community, ILC will do for the world. But the e+e- ILC project may go even beyond mere fundamental science and contribute to one of the world most pregnant issue: Energy, not merely high-energy but, more generally: energy for the society.

Artistic view of the ILC center in Kitakami (Japan) ILC-Iwate

The ILC scientific goal is simple: high precision study of the Higgs particle recently discovered at LHC (CERN) and other signals LHC could possibly single out. New effects will also be searched for, effects which could have been missed by the LHC due to the heavy background. Higher precision here concerns, more particularly, the various Higgs couplings, limited at LHC, in part, by the complex structure of the interacting particles, the protons compared to the elementary electrons. Higher precision through higher order corrections would also shed light on an energy regions (beyond the collider energy) of the current well established Standard Model.

In a international framework as the one being formed, ILC is affordable, technically achievable and complementary to as well as naturally following up the LHC.

But like all big infrastructures, ILC is power hungry and the equivalent of a 2-300,000 people electricity budget will be necessary to run its frontier science program. Though not overwhelming compared to the consumption of current colliders or some industrial plants, it may raise concerns in the current energy/carbon/global heating context. 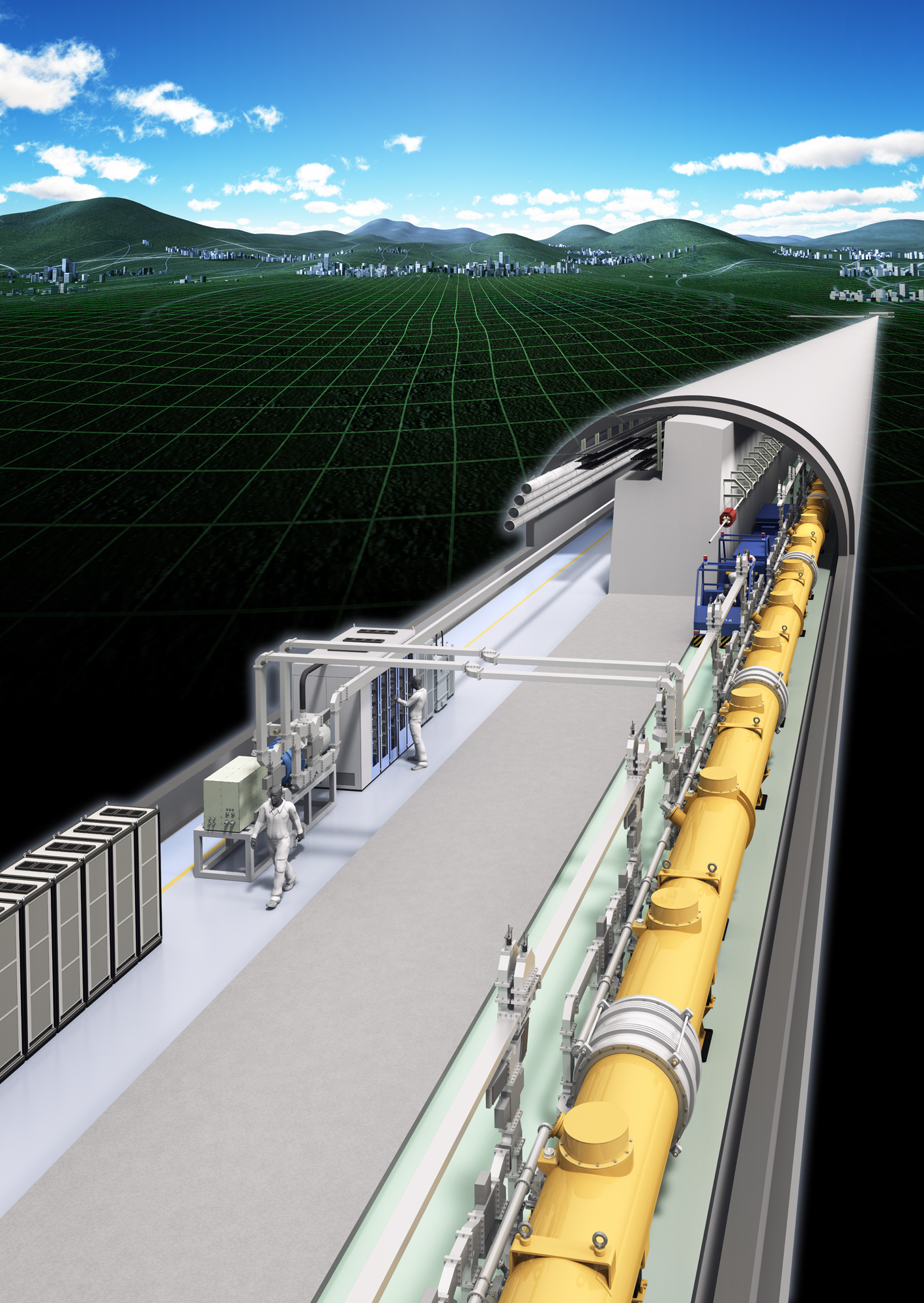 However, rather than being a problem, it may turn out to be a solution to the energy research, a unique opportunity to cluster on the same campus:
- fundamental high-energy and sustainable energy researches
- high quality demanding energy consumption equipment and sustainable energy productions
- researchers on energy related issues (from basic to technology) and high-energy physicists/engineers used to running large scale infrastructures.

It will actually provide what is most missing nowadays in energy research (as voiced in a recent OECD meeting) and what CERN has succeeded to install in Europe:

Unity of time, place and action.

Fundamental research has knowingly or by chance contributed greatly to many inventions or discoveries that have changed the world. The WEB, today a multi-trillions dollars business and roughly 4.1% of the G-20 GDP was actually invented for HEP needs at CERN to solve the problem of the complex and scattered documentation. The WiFi technology took the center stage after an Australian radio-astronomy team setup a signal unsmearing system to search for micro black holes. The GPS would be worthless without Einstein special and general relativity equations and the list goes on and on, electronic, computing, material analysis, genome analysis, health diagnostic, ion/hadron therapy …

Cheap, sustainable and clean energy is the next major endeavor HEP and ILC may contribute to.

In the past, large research infrastructure energy supply was, in a way, taken for granted. The energy was cheap and stable and all human resources were buzy building and running the complex research equipment rather than worrying about electricity production. But the situation has changed, in Europe, the price of electricity for industry has nearly doubled this last decade, in addition the electricity power needs has increased with the colliders energy to reach 1.2 TWh/year for the LHC, so that the electricity bill is now a substantial part of the running cost.

Two recent workshops in Lund University and at CERN, organized by CERN, the European Association of National Research Facilities (ERF), and the European Spallation Source (ESS) have been focusing precisely on “Energy for Sustainable Science at Research Infrastructures”. The ESS energy concept which put forward the 4R concept: Renewable, Recyclable, Reliable and Responsible has been discussed in depth and advocated in many scientific and technological projects including ILC ( T1, T2, T3). Again, at the last LCWS (Linear Collider Workshop Series,(Tokyo), ILC energy issues were addressed in parallel sessions (T4, T5, T6) and in the concluding plenary talk.

In the industry, the energy supply for large plants is also seen as a serious issue and companies or even skyscrapers located right in city centers are installing and managing their own electricity supply so as to be independent of the Grid. It is a larger investment but it pays off in term of reliability, flexibility and running cost.

So the technical, environmental and financial motivations are there, the scientists are conscious of their responsibility, the next question is how to proceed toward:

The ILC project relies on a stable and 24/7 reliable electrical supply for many components: klystrons, cryocoolers, magnets, computing and office/labs. A 200 MW peak power is estimated for the basic 500 GeV collider and 300 MW for the 1 TeV extension. Simply said, a greener ILC study should address three topics:
- energy saving: how to improve the power efficiency of each collider components;
- energy recycling, how to re-use the heat produced in the cooling of the klystrons, magnets and cryocoolers (more than 80% of the electricity consumed is dissipated in the cooling towers), how to recover the beam energy usually dumped after the interaction point and, finally,
- how to produce and manage renewable energy in a stable and reliable way for this high precision machinery.

Energy saving, recycling and sustainability find applications outside of HEP research and many developments made here would be valuable for the society. Building a major scientific equipment, energy self-sufficient, is a challenge and can only succeed by steps. To cause no delay to the ILC schedule, a conventional connection to the electricity GRID will be set as the baseline. Energy research labs and pilot plants (solar, wind, geothermal, bio-mass) as well as storage systems, will be studied to identify the best mix and some will be built on site or elsewhere. Then part-by-part the connection to the Grid will be progressively phased out to be replaced by sustainable power plants. In parallel, basic research on new materials and new technologies for energy will be pursued in dedicated laboratories in close contact with the high-energy program. Many questions and issues are open and should be addressed in forthcoming dedicated workshops.

The proposal being discussed here, is to create with the ILC at its heart, a new global science city open to the world, to foster innovation from “low” to high-energy, from eV to TeV including accelerators research, material science and new energy technologies.