The CLIC workshop 2016 covers Accelerator as well as the Detector and Physics studies, with its present status and program for the coming years.

Some talks were covering the CLIC electrical power consumption (272 MW) which is 65% larger than ILC at 500 GeV (164 MW). The CLIC teams have made important efforts to decrease the wall-plug AC power figures by increasing the klystron efficiency and zeroing the NC magnets consumption through the use of permanent magnet. These achievements were quite impressive.

Igor Syratchev (CERN) presented the “Summary of the high-efficiency day”. Klystron efficiency has become a very active topic. 13 talks were presented by researchers and companies.

His encouraging conclusions were as follows:

- The High Efficiency International Klystron Activity (HEIKA) has matured and became now a truly international and efficient team of experts.
- We had a lot of progress during last year and gained much more confidence that beam based RF power amplifiers can be as efficient as 90%.
- Our progress is a good example that close collaboration between Labs and industry from the very start is a very efficient way to proceed

The design klystron efficiency has been set to 70%, achieving 90% would be a tremendous success. It would lead to a saving of roughly 20 MW at 500 GeV CM energy.

Using permanent magnets instead of normal conducting magnets would induce a nominal saving of 28 MW, a 10% gain over the total CLIC consumption. 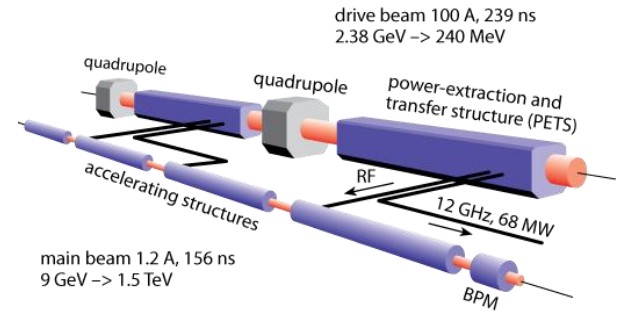 Jim Clarke (STFC, UK) in his talk on Permanent magnets with adjustable strength showed that only 2 designs were necessary to cover the needs for the 45000 quadrupoles (3 TeV). There were actually tunable by moving the permanent magnet close or far away from the fixed poles with a motor. Prototypes were build and tested. Dipole magnet studies have also been started and prototypes are being prepared.

Following the discovery of the/a Higgs at ~125 GeV, the CLIC community decided to explore the possibility for a 380 GeV machine to cover both the detailed Higgs and top physics (re-baselining) Eva Sicking (LAPP/CERN) addressed this topic on her talk “Presentation/discussion on the CLIC re-baselining document”

The study for a 11 km long first stage CLIC is still on progress but the first conclusions are: