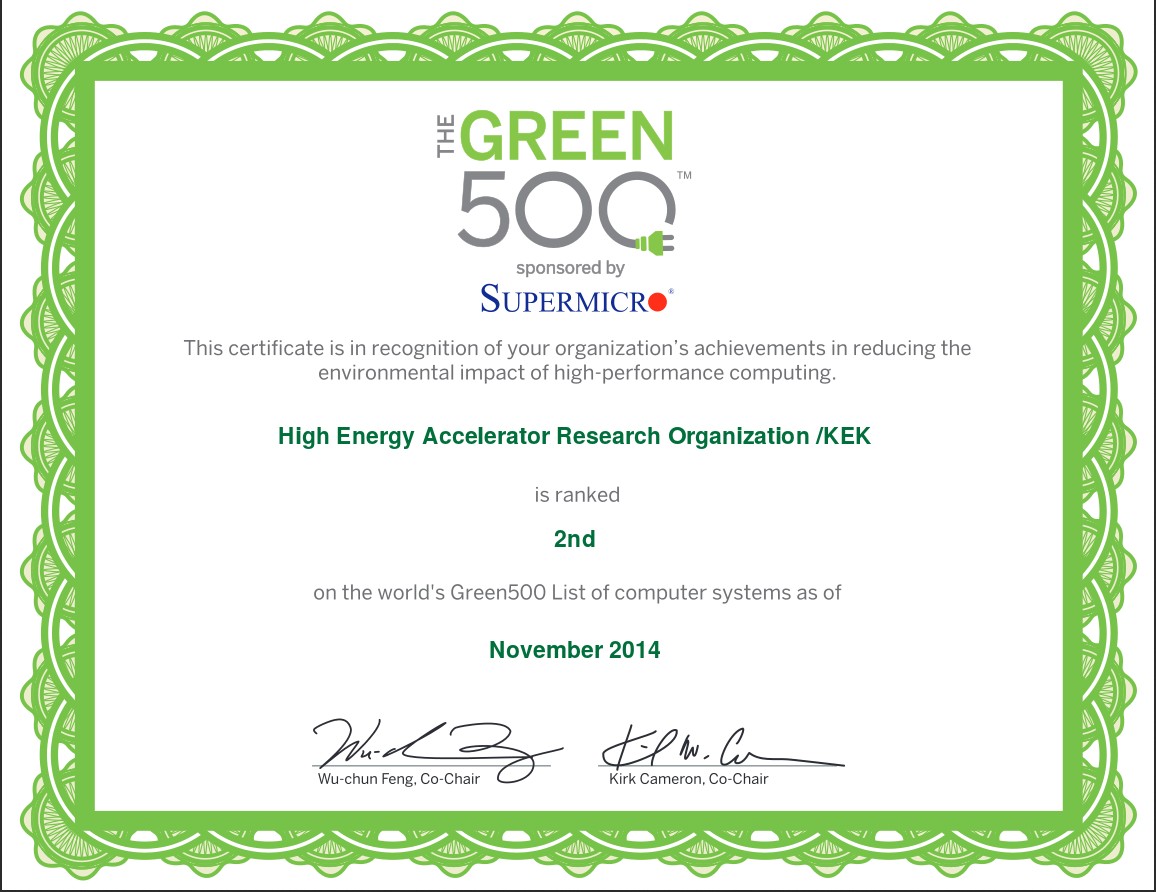 Large computing farms, supercomputers and servers are heavy electrical power consumers to the point that reducing energy consumption has become one of the main issue in CPU and system developments. The Green500 list has been created to support the efforts towards improving computing efficiency and reducing power consumption. In its last issue, the two top ranks are taken by systems for the nuclear and high-energy physics applications High-Energy Physics is heavily consuming computing resources. Accelerator designs, detectors and physics simulations, data-analysis and theoretical calculations require hundreds of Teraflops, tens of Petabytes of storage and hundreds of Gbytes/s for data transfers. The data grid concept has been precisely invented to cover LHC needs. Most of the computing load, although distributed all over the world, is based on the farm concept: one cpu one job. However, theoretical calculation on extended lattice for the non-perturbative part of quantum chromodynamics, called lattice QCD, requires massively parallel programming and run on supercomputers. It has also been shown that supercomputers “idle cycles” can be favorably scavenged providing tens of millions of cpu-hours for farm-type jobs.

But whatever the technology, big farm or supercomputers, their large energy consumption has become a real issue preventing higher performances both for technical and running cost reasons. This is why big efforts are now underway to save energy and lower the power figure of large computing equipments. The Green500 list mirroring the top500 for the fastest supercomputers has been created to monitor the progresses made on the energy consumption frontier.

The purpose of the Green500 is to provide a ranking of the most energy-efficient supercomputers in the world. For decades, the notion of "performance" has been synonymous with "speed" (as measured in FLOPS, short for floating-point operations per second). This particular focus has led to the emergence of supercomputers that consume egregious amounts of electrical power and produce so much heat that extravagant cooling facilities must be constructed to ensure proper operation. Extrapolation shows that Exascale computing will need electrical power beyond current possibilities. The top Green500 most energy efficient supercomputer was created in 2007 to promote R&D in energy efficient computation.

Assuming that L-CSC’s energy efficiency could be scaled linearly to an exaflop supercomputing system, one that can perform one trillion floating-point operations per second, such a system would consume on the order of 190 megawatts (MW). “Although this 190-megawatt power envelope is still far from DARPA’s optimistic target of a 67-megawatt power envelope, it is approximately 16 times better than the initial projection of a nearly 3000-megawatt power envelope from 2007 when the first official Green500 list was launched,” says Wu Feng of the Green500.